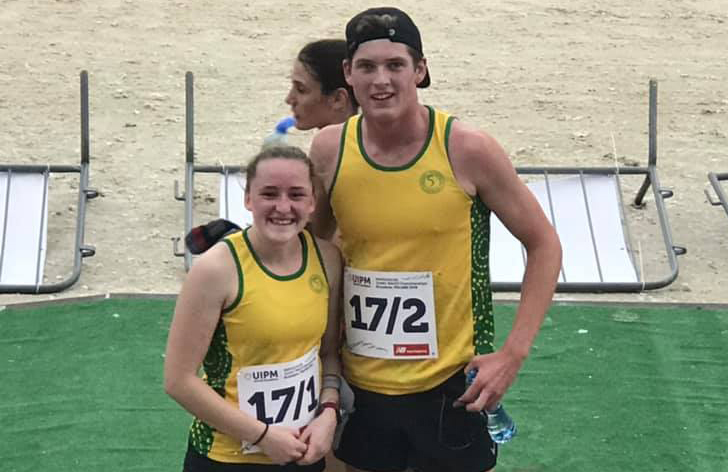 There is an element of luck involved in the Show Jumping discipline of Modern Pentathlon, when athletes are riding on a borrowed horse, and unfortunately luck wasn’t on the side of the Australian Mixed Relay team at the World Junior Championships.

Tully Watt was unable to complete the show jumping course with four refusals, which meant Rhys Lanskey didn’t get the opportunity to ride. It is an area strength for both athletes and where the team expected to move up the competition.

“I’m a bit disappointed but no one got hurt and I couldn’t have done anything different,” Watt from Melbourne said. “The horse was no problem in the warm-up, so it’s just one of those things with pentathlon.”

The national senior champions bounced back from the riding disappointment in the Laser-Run to finish the competition on a high and give their supporters plenty to cheer about in Poland.

“Tully started off the Laser-Run really strong and I was able to follow that up,” Lanskey from Brisbane recalled.

“I was happy with how we finished in the Laser-Run,” Watt said.

The Australians finished the competition in 15th place, passing several nations in the final event, where they had the 10th best performance in the Laser-Run. They were eighth after the Swimming competition to open the day and equal 16th in the Fencing. 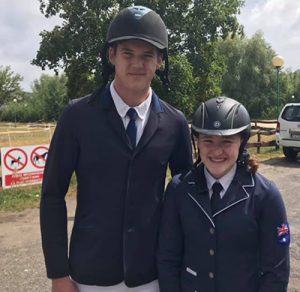 Rhys and Tully ahead of the Show Jumping.

The World Juniors is open to athletes aged up to 21 years of age. Watt is 18 and Lanskey just 17.

Lanskey showed maturity above his years and experience to handle the disappointment at his first international competition.

“No matter what you just need to overcome these disappointments and adapt to them,” he said. “It has still been an amazing experience.”

Olympian and Modern Pentathlon Australia President Kitty Chiller was on hand to support the young Australians.

“In mixed relay rules if the first rider is eliminated the second does not get to ride,” Chiller explained.

“It is a real shame as there was a total of seven eliminations out of the 18 teams, so if we had of posted a score we would have had a top 10 finish overall.”

Olympian and Australian junior coach Eszter Hortobagyi, who has had a lot to do with these athletes, was proud of how they handled the difficult circumstances.

“I think a lot of new experience for everyone,” she said from Poland. “They will learn from it and hopefully they can use it in their future.

“The riding was a real shame as the warm-up was really good. It was a really tricky situation for them, but they will learn from it.

“They should be very happy with their (Laser-Run) times and I think it finished off the competition well for them.”

Hortobagyi and Adam Temesi are coaching a group of younger Australian athletes who are training and competing in Europe. They drove from Hungary to Poland with their squad of five to cheer on their fellow Aussies.

Watt and Lanskey now turn their attention to the World Youth (U19) Championships next week. They will be competing against athletes their age and they have learnt valuable lessons at the tougher World Juniors.

“I’ve learnt to take time in the fencing, don’t get impatient, and wait for the hit to come,” Lanskey said.

The Brisbane-based athlete who has only been training seriously for the sport for less than a year, competed in the men’s individual competition earlier in the week.

Watt, who was focused on the Mixed Relay event in Drzonkow summed up her learnings ahead of their next international test.

“We’ve worked hard and we need to make sure we enjoy it!”