Tokyo and Beyond: Transformation of Modern Pentathlon 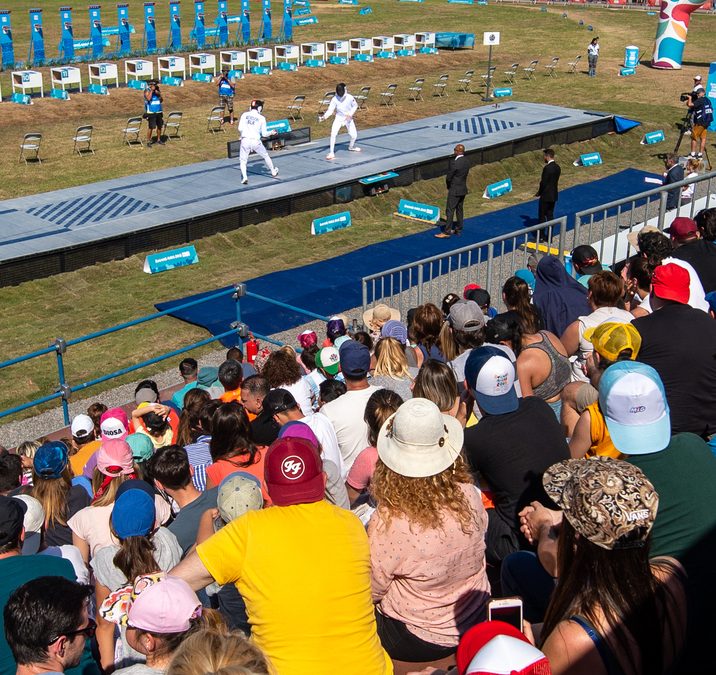 As one of the busiest international seasons in the history of UIPM Sports draws towards a close, UIPM President Dr Klaus Schormann reflects on the dramatic transformation the Modern Pentathlon movement has undergone in recent years. He conducted a Q&A with Around The Rings to talk about the new events and innovation in the sport.

Q: It’s been quite a busy few months. How did the Pan American Championships go?
A: The Pan American Games 2019 in Lima was a great showcase for Modern Pentathlon and we were delighted to have two additional medal events this year with the Men’s and Women’s Relays.

Together with the Mixed Relay and the individual events, which were Olympic qualification events, it meant we had five days of high-quality pentathlon to entertain the spectators in Lima and the huge TV and digital audience across the Americas. We saw the athletes competing very hard for the Olympic qualification places – five for women and five for men.

Q: How many athletes in total have now qualified for the Tokyo 2020 Olympics?
A: We now have 17 places for men and 17 for women confirmed, so 34 from the total of 72. All selections are subject to the UIPM Olympic qualification criteria.

A special mention goes to Lithuania and Belarus, who have already secured the maximum two places for women, and Great Britain and France who have done the same on the men’s side.

Next we have the Asia/Oceania Championships and Olympic qualification event in Wuhan, China from November 11-21, where another six automatic places for each gender will be on offer (five from Asia and one from Oceania).

Q: Last week the combined Laser Run and Pentathlon World Championships took place in Budapest. How does the combined format work?
A: The first-ever combined UIPM Pentathlon and Laser Run World Championships was a huge success which, if anything, actually exceeded our expectations. Already we heard so many positive words from athletes, coaches and families, many of whom traveled to Budapest to compete together with passion and determination and great team spirit in different age groups.

Arranging both world championships simultaneously is a challenging proposition for the local organisers, but we had a lot of faith in Hungary as they have been one of the pillars of our Union for many years, hosting the Pentathlon World Championships once in every decade since 1954 (1969, 1979, 1989, 1999, 2008 and 2019).

Our flagship competition has grown considerably since the last time it was here, especially in the presentation of the venue as a Pentathlon Arena where all five disciplines can be viewed by spectators from the same seat. The Hungarian Modern Pentathlon Association organised a great World Championships for Modern Pentathlon and Laser Run in Kincsem Park.

On the weekend of September 6-8 we had not only the Laser Run and Modern Pentathlon finals but also the UIPM Annual Awards Gala Dinner (Sep 7) and the 2nd Pierre de Coubertin Pentathlon Day (Sep 8), coinciding with the Mixed Relay events. We were delighted to be joined by our Honorary President, HSH Prince Albert II of Monaco, and our 1st Vice President and IOC Vice President Juan Antonio Samaranch, both of whom remarked that the scale of this championships made it feel like we were at the Olympic Games.

Q: Laser Run is fairly new, but it seems to take up quite a few dates on the UIPM calendar. Tell us about it, and why it is so popular.
A: You are right, Laser Run was born as a standalone sport only in 2015 when the 1st UIPM World Championships was held in Perpignan, France. But it has been growing rapidly ever since.

The main vehicle for the growth in popularity of this sport is the UIPM Global Laser Run City Tour (GLRCT). With almost 100 events annually across all continents, the GLRCT enables people from urban communities in cities and towns right across the world to have an entry point to UIPM Sports that they did not previously have. Our vision is that this first experience of multi-sports will lead them on a pathway through our sports pyramid, which has the core Olympic sport of Modern Pentathlon at the top.

We are delighted that Laser Run was included as a showcase sport at the 1st World Urban Games in Budapest (September 13-15), which has helped to grow the profile of our most popular development sport even more.

Q: A few years ago you had to modernise your Olympic competition structure quite rapidly. How has this paid off? What changes do you see in future?
A: I think it is fair to say that very few sports have made such dramatic changes to the presentation and format as Modern Pentathlon has in recent years.

We already had gender balance since the 1993 World Championships in Darmstadt, Germany, where we started with the one-day format. In 1994 we changed from fire pistol to air pistol, in 2008 we created the combined run/shoot and in 2010 at the 1st Youth Olympic Games in Singapore we introduced laser shooting. This transformed the environmental impact of our sport and made it safer and more sustainable.

Apart from this evolution in the format, we have pushed hard to promote our Mixed Relay, which has become very popular among athletes since it was introduced at the YOG and World Championships in 2010. We are determined to achieve a reward for the athletes and nations who have helped us cultivate the Mixed Relay by adding this as a third medal event at the Paris 2024 Olympic Games.

Q: The UIPM 2020 Congress will take place in Xiamen. What are some of the issues you will be dealing with?
A: Last week the UIPM Executive Board approved the concept of a New Tetrathlon format designed for the 4th Youth Olympic Games in Dakar, Senegal in 2022. A special working group will now start work on finalising the rules of this format for approval by Congress in 2020.

There will also be a large number of applications for UIPM membership to be approved. Our development team and myself are strongly recruiting new member nations as we aim for a target of 150 national federations linked to the UIPM Congress in November 2020 in Xiamen.

I’m sure there will be many other interesting motions on the table for Congress to debate and decide. As I mentioned before, our vision is to have 150 nations represented at this Congress, making it the greatest democratic exercise in the history of our movement.

Q: Modern Pentathlon doesn’t appear to have a big problem with doping. Can you explain why?
A: The most important thing to say is that we have a rigorous anti-doping system that ensures we are doing everything in our power to preserve the reputation for fair play that has always been associated with this sport, and to protect clean athletes.

Why do we have very few doping cases? I believe there are a number of reasons but the main one is that Pentathlon requires a unique set of physical and psychological skills. As Baron Pierre de Coubertin envisaged, it is a test of morality as well as athleticism, and performance-enhancing drugs have a limited impact on a sport with such complex demands. We also have a strong culture of education within our sport, which encourages fair play.

Q: Around the Rings recently published an article by Alan Abrahamson calling for shooting to be removed from the Olympic programme in light of mass killings in the States. How do you respond to people who would like to see shooting dropped from all Olympic disciplines?
A:There is an essential distinction to be drawn here. In 1994 we introduced air pistols and since 2010 we have only used laser pistols, shooting laser beams in the Olympic Modern Pentathlon since London 2012 and across all our multi-sports, rather than pellets or bullets.

We made this decision not only because of the negative association of using firearms, but for environmental reasons. Laser shooting is 100% safe and causes no damage to the environment, making it more attractive to young athletes (and their parents) and also more sustainable for organisers.

Q: There have been a lot of changes to the Olympic sport programme. What are you doing to make sure Modern Pentathlon isn’t dropped from the program?
A: I hope the answers provided above will cover much of what we are doing! Our Olympic status is essential to the survival of this wonderful and unique sport, which is the only sport created especially for the Games by Baron Pierre de Coubertin when he introduced it in Stockholm in 1912. But we are no longer looking back in time, we are always looking forward and innovating to make sure our beloved sport appeals to new generations of athletes and viewers.

We have been guided very closely by the IOC Olympic Agenda 2020 in planning and implementing the recent changes to our format and those currently in the pipeline. We see our sport as a vehicle for unity, peace, education and democracy, and we don’t only want to be strong within the Olympic movement – we want the entire Olympic movement to be stronger as a result of our collective efforts.

Q: Is there anything else you would like to say?
A: The goals of UIPM are to follow the IOC Olympic Agenda 2020, to respect and follow the Olympic values, to promote clean sport, to protect the legacy of Pierre de Coubertin, to cultivate the interest of present and future generations, and to be represented worldwide through our various development sport and our core Olympic sport of Modern Pentathlon.

I started as UIPM President on July 1, 1993 in London with 63 NFs, and in 2020 we will have 150. I think that our Union is growing based on innovation and modernisation with many different multi-sport combinations. Laser Run is a new highlight and our sports are now included in many different sports festivals: the Olympic Games, Asian Games, Pan American Games, Southeast Asian Games, South American Games, World Urban Games and World Military Games. We also have a World University Modern Pentathlon Championships through FISU.

With thanks to the UIPM and Around The Rings