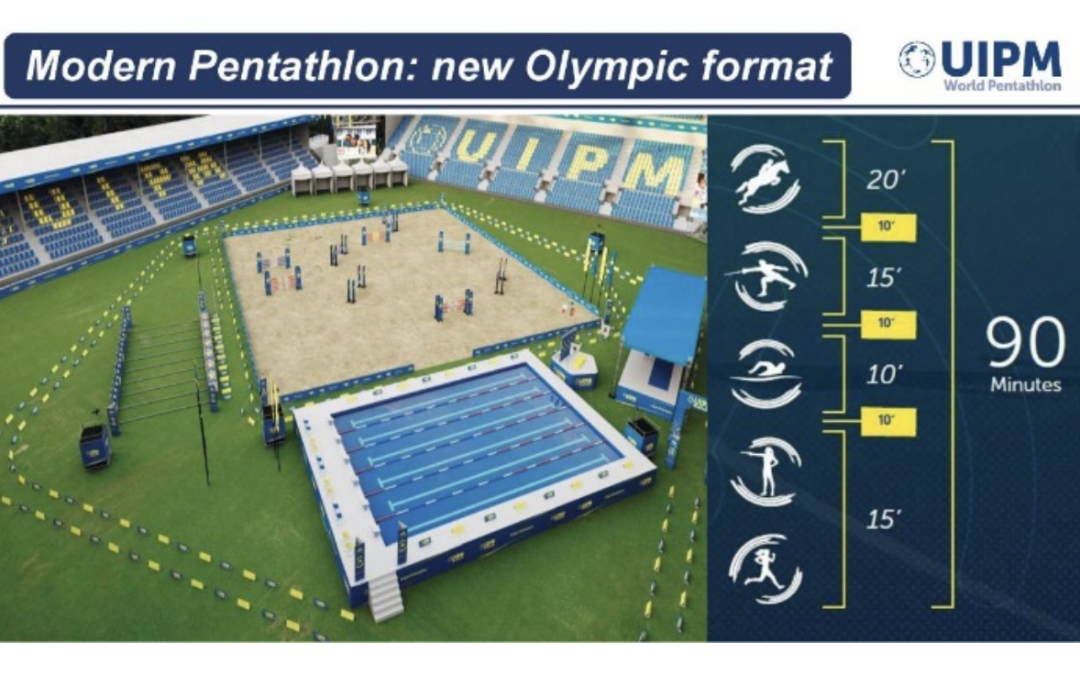 Viewers and spectators watching the Olympic Games’ most demanding sport in 2024 can expect to see a compelling showpiece featuring all five disciplines in 90 minutes. The new format features an elimination system that results in only 12 athletes taking part in each final.

The bold changes to the Olympic product have been supported by the IOC, whose Executive Board met today to finalise the Paris 2024 programme based on recommendations from the IOC Programme Commission.

UIPM welcomes the support received and also acknowledges the reasons why its Mixed Relay proposal – along with all applications for additional medal events by other International Federations – was not approved for Paris 2024.

The changes to Modern Pentathlon are designed to transform the profile and popularity of a sport that has been a constant feature of the world’s biggest sporting event since it was introduced by Baron Pierre de Coubertin – founder of the Modern Olympic Games – in Stockholm in 1912.

The latest changes to one of the quintessential Olympic sports follow other transformative innovations since Atlanta 1996 – the move away from a five-day format, the introduction of laser technology and combined running and shooting, the arrival of the Fencing Bonus Round and the establishment of an all-in-one Pentathlon Arena, which will feature at the Olympic Games for the first time in Tokyo (JPN) in 2021.

The vision for 2024 is designed to make Modern Pentathlon shorter, faster, more connected and compact and easier to understand for all audiences.

The format was approved by the UIPM Executive Board in October after test events in Budapest (HUN) and Cairo (EGY) in September that followed recommendations made by a working groupset up by UIPM in 2019.

A series of stakeholder communications sessions designed to increase understanding of the changes among the global UIPM Sports community took place online in November. A number of athletes spoke out in support of the format ahead of today’s decision.

As a sustainable and cost-effective model for the future of Modern Pentathlon within the Olympic Games, the proposal is also compatible with the IOC’s Olympic Agenda 2020 and New Norm reforms.

UIPM President Dr Klaus Schormann said: “We are proud of the dynamic changes made to the Modern Pentathlon in recent decades and we are very pleased that the IOC has recognised our commitment to innovation by supporting this ambitious vision for Paris 2024.

“Today marks an exciting landmark in the history of our sport and this is a day for our global Modern Pentathlon community to celebrate together after a difficult year. Our beloved sport is one step closer to securing its future at the Olympic Games!

“The positive communication received about the new Modern Pentathlon format is a tribute to the members of the UIPM working group who came up with the vision and the UIPM staff who worked so hard to turn the dream into a reality in difficult conditions this year.

“We are looking forward to working very closely with colleagues from the IOC, Paris 2024 and Olympic Broadcasting Services to finalise plans for the historic Olympic Summer Games taking place in the magical city of Paris for the first time in 100 years.

“Of course we are all disappointed that our Modern Pentathlon Mixed Relay will not be a part of the 2024 Games as a third medal event. We have worked very hard on our Mixed Relay and it has been a popular feature of all three Youth Olympic Games to date.

“We appreciate that all International Federations have been unsuccessful in their applications for additional medal events for Paris 2024. This setback only sharpens our resolve to continue innovating and reshaping Modern Pentathlon for future generations.

“The sport created by Baron Pierre de Coubertin continues to represent the most complete examination of any athlete competing in the Olympic Games, while offering spectators more excitement and a better showcase for each of the Pentathlon disciplines.

“Our new Modern Pentathlon format is strongly aligned to these two principles. It will dramatically improve the experience of viewers and spectators while retaining the essence of the sport.

“I guarantee all audiences that they will see a wonderful sporting spectacle when they watch the Modern Pentathlon at Tokyo 2020 in 2021 – and an even better showcase in Paris three years later.”

Further testing and evaluation of the new Modern Pentathlon format will take place in 2021.