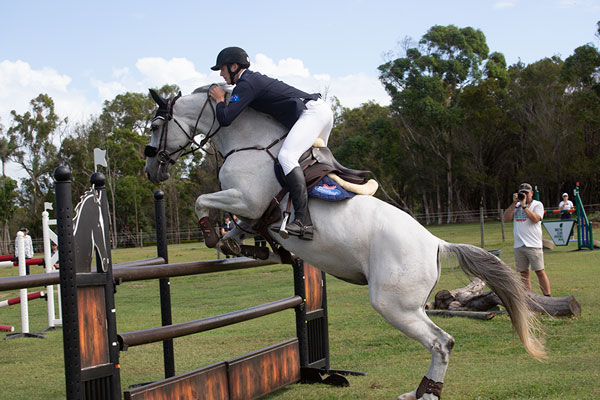 After a year filled with adversity, Modern Pentathlon Australia is excited to announce that the Australian National Championships will return to Melbourne in March 2021.

Working closely with the state sporting organisation, the National Championships will see the riding and fencing round robin take place on day one with the fencing bonus round, swim and laser run on day two of competition.

With the competition season this year heavily impacted by the global pandemic, Modern Pentathlon Australia President Kitty Chiller said that the national championships would be a highlight on the domestic event calendar.

“After a difficult year for everyone in 2020 it will be fantastic for us to get together again as a community in March, celebrate our elite and up and coming athletes and take another step on our current exciting Pathways and High-Performance journey.” Chiller said.

Our Olympic qualifiers Marina Carrier and Ed Fernon are tipped to compete at the event as part of their preparation ahead of the Tokyo Olympic Games.

However, it will not be an easy competition for either Olympic hopefuls. Rhys Lanskey and Nikita Mawhirt will be looking to defend their historic 2020 titles, after having also been forced into undertaking an intense winter training block.

Modern Pentathlon Victoria President Kate Thompson said that they were thrilled to be working closely with MPA to host the event.

“To be invited to host such a prestigious event in our state is welcome after the disappointments of 2020.” Thompson said.

“The enthusiasm it has and will generate for our pentathletes is an exciting challenge for the future development of the sport in the state as well as nationally.

“We look forward to welcoming competitors from all states and New Zealand and making the event a memorable one for all.”

New domestic time trials have helped to keep athletes motivated during the period of no travel, and the results have seen some incredible potential in the junior age groups.

Continual improvements seen by strong up and comers Genevive Van Rensburg and Zara Temesi along with Tom Langdon McMillian and Lachlan Nichols will be looking to prove themselves in the absence of the Youth Olympic Games.

With competition experience critical to career success, MPA’s Performance and Pathways Director Hannah Every-Hall said that National Championships was an important event for every athlete, regardless of their age, to be competitive on the international stage.

“Competition is vital for motivation as well as recognising improvement and shedding light on areas that need improving.” Every-Hall said.

“It is important for the athlete to monitor progress in their sporting journey. Regular competition within a sport also creates a sense of a community and support network within the sport, bringing additional benefits.

“This is why the National Championships is imperative for building Modern Pentathlon in Australia.”

MPA will continue to work closely with MP Victoria, as well as the local training hubs and the state government in the coming months in preparation for the event, set to take place March 27 & 28, 2021.