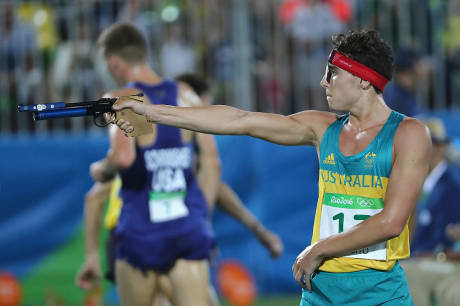 Australia’s fantastic family run in modern pentathlon at the Rio Olympic Games has continued with Max Esposito finishing seventh in the men’s final on Saturday, 24 hours after his older sister Chloe won gold in the women’s event.

It was an outstanding result for the 19-year-old who made up a lot of ground in the final round, the combined running and shooting event.

Esposito said his first Olympic experience was unbelievable, and there were so many things to celebrate, his seventh place and Chloe’s gold above all.

“I don’t have words, I’m speechless. It’s unbelievable. I think it’s a great competition for both of us,” he said.

“We’ve got reputations from all the pentathletes that we’re psycho trainers and today, coming here and showing that we can get a good result, that hard training pays off.

“It’s knowing that I gave up my life to do pentathlon, I don’t regret leaving a normal life because the result I got today is so special and unforgettable and I will have this memory forever.”

Esposito like his competitors missed a few laser targets under pressure. He took nine, six, seven and ten shots to get the five targets across the four trips to the range. He still ended up with the fourth quickest combined time.

“I was really happy with my running, the shooting I could have done better but I think a little bit the crowd and the people… I was trying to just focus on me… I didn’t feel nervous,” he said.

“I probably wasn’t getting my sights right, that was the letdown I think.

“I went fast in the first two laps but held back a little bit, then in the last two I just gave it everything I’ve got.”

Esposito, the youngest man in the field, finished only 17 seconds behind the winner, Alexander Lesun of Russia who started the final event with a handy lead.

Silver went to Pavlo Tymoschenko of Ukraine and bronze to Ismael Marcelo Hernandez Uscanga of Mexico. The Mexican finished six seconds ahead of the Australian in a tight contest.

Australia’s best result in the men’s modern pentathlon was a fourth place from Peter Macken at the Tokyo 1964 Games.

The nation’s first medal in modern pentathlon came only yesterday courtesy of Max’s sister Chloe who stormed home to claim gold. Chloe was seventh on Olympic debut in 2012.

“After watching Chloe last night she inspired me, and I was so determined to come fighting back,” Max said.

“I know from her (result) in London 2012 she came back from 16th to finish seventh overall so if she can do it, anyone can do it. She was an inspiration.”

Max finished the first three rounds of pentathlon events with 826 points, 45 points behind competition leader Alexander Lesun of Russia. That meant he started the final round, the combined running and shooting event 45 seconds behind Lesun.

Esposito was in 17th position and the field of competitors very tight with London gold medallist David Svoboda (Czech Republic) and silver medallist Zhongrong Cao both starting ahead of him.

It was almost a mirror of his sister Chloe’s final run yesterday when she also started the final event 45 secs behind the leader, and in an outstandingly accurate shoot and super quick run, blitzed her opponents to win gold.

“As a training partner she always helps me so she’s a great example and an idol,” Max said.

The running and shooting combined event is Esposito’s strongest discipline of the five pentathlon events. At the Open Central Asian Cup in June he completed the combined event second fastest in 11:44:00 to finish second overall.

In the penultimate event, the show jumping, Esposito achieved a perfect round (and 300 points) by avoiding any obstacle or time penalties on horse Udanum Vila Fal. Esposito said the warm-up for the show jumping was “nerve racking” but he managed to control the horse once on the course.

This came after a sub two-minute time in the pool that put Esposito in good stead at the start of the second and final day of the men’s modern pentathlon.

He was the fourth fastest finisher both in his heat and overall, earning him 341 modern pentathlon points.

“I was so so happy… of all the tapering and the sprinting that we’ve done in the last month, it’s all paid off,” he said.

“I felt like I was just walking through a park. It was good to beat some of the top guns too who usually beat me in the swim, they were probably surprised.”

At the start of today Esposito needed to make up some much needed ground after the fencing ranking round on Thursday (August 18), the opening day of the pentathlon.

Following 35 bouts in a round-robin competition against each athlete, Esposito finished in 29th position with a record of 14 victories and 21 losses.

He said his first Olympic experience was amazing but still left him with plenty of motivation to grow and improve.

“Being here competing with other pentathletes who also competed at London is just so good, so special.

“In three weeks I have Junior World Championships in Cairo, Egypt. After that I’ll be heading home to Australia.