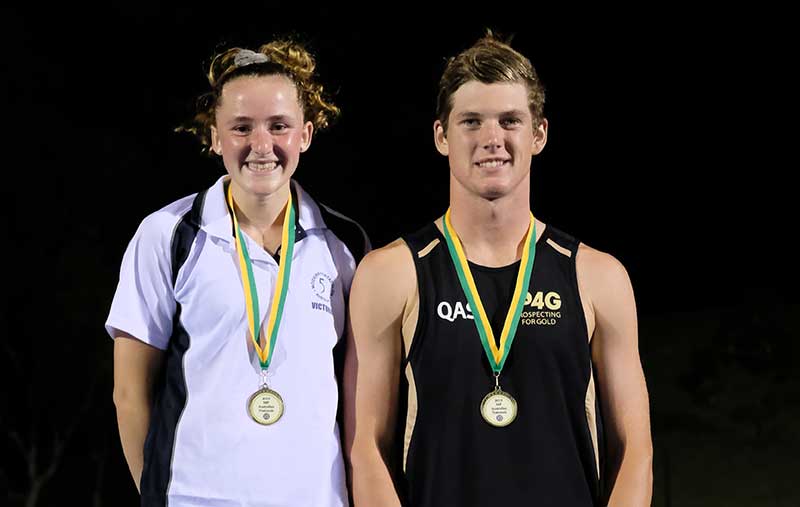 The 2020 Australian Modern Pentathlon Championships will be held in Brisbane on Sunday, with teenage stars Rhys Lanskey and Tully Watt aiming to defend their national open titles.

Lanskey from Brisbane and Watt from Dixie in regional Victoria, both 18, had breakthrough performances at the same event and venues a year ago. And are just two of the outstanding young athletes that are prominent in the sport.

Watt will have strong competition from Perth’s Nikita Mawhirt. The 19-year-old represented Australia at the Youth Olympic Games in 2018 and is getting back to her best following a riding accident in July last year.

Mawhirt suffered significant bruising in the top of her tibia, a build-up of fluid around the joint including a baker’s cyst and some ligamental strain to her meniscus from the fall. She was unable to do anything for 12 weeks, then had her year 12 exams and has been back in full training for six weeks.

“It’s great to be back!” Mawhirt said. “While it was nice to have time off last year and take a break both mentally and physically, I definitely missed the routine of training and being able to set myself goals to aim for.

“It was hard seeing a lot of the team travelling overseas and competing and not being able to join them, but it made me realise how much I missed the sport and wanted to get back into training myself.”

Mawhirt arrives in Brisbane following the Fencing Nationals in Melbourne and then training with a large group of fantastic juniors in Coffs Harbour with Adam and Eszter Temesi.

“I think anyone would agree there are huge benefits being able to train with other people, which not often many of us get to do being spread-out all-over Australia,” Mawhirt said.

“I’ve been lucky enough to run, shoot and fence with Adam and Eszter and their athletes up here, as well as join in the swim sessions at the local pool with Pedro, Coffs resident super coach. With it still being early days back into full training, it’s definitely been an adaptation, but I’ve thoroughly enjoyed getting back into routine and can’t thank Adam and Eszter enough for their hospitality and the support they provide athletes in Australia.”

Training has been going pretty well but as I’m finished school I’ve moved back from Melbourne to Dixie, which I’m really happy about.

“I’m doing most of my training in Warrnambool, just coming to Melbourne once a week for fencing. Being at home now I’m able to train with my swimming club, which I really enjoy, but haven’t really been able to do for about three years – so I’m making the most of it and spending a lot of time in the pool.”

Lanskey had a busy year in 2019 following his national title. He competed at the World Juniors in Poland, the World Youths in Bulgaria and then the Asia/Oceania Championships in China. In China he contested the open event and pushed Ed Fernon all the way for the Olympic Oceania spot.

“After China I took a break for about seven weeks just to unwind from the hectic year,” Lanskey said. “I just took some time to be away from the training schedule which really helped clear my head for what I have planned for my future in the sport.

“Leading up to China I had some issues with illness but right now I am fit and healthy and feel I’ve had a good preparation. Shooting has been at the forefront of my training leading up to this Nationals.

“Reflecting on my performance in the Olympic qualifier, it’s not how I expected to perform but I feel I did the best I could for that day in time and that’s all I could ask for.”

Unfortunately, Lanskey won’t get the chance to battle for the title with Ed Fernon at Nationals. Fernon and Marina Carrier, who were recently selected for the Tokyo 2020 Olympic Games have weighed up their options and will need to miss Nationals.

Fernon is in a heavy training block ahead of the World Cups in Bulgaria at the end of the month, and Carrier is only recently back in full training after missing a significant amount of time with injury – before and after the Olympic qualifier in November.

Both are disappointed to not be able to compete and support the event, however they are keeping their eye on the big goal of being in the best possible shape possible for the Olympic Games.

In the juniors on Sunday Aleska Van Heekren (NSW) is looking to defend her Tetrathlon title from 2019. The girls U17 Tetrathlon title looks to be the most competitive event of the day with six competitors including Genevieve Janse Van Rensburg (NSW) and Zara Temesi (NSW) who were fifth in the youth team relay at the Asia/Oceania Championships in November.

The facilities are first class again for the 2020 Nationals. The swimming and fencing competitions will be held at Chandler, the show jumping at Cherbon Waters Equestrian Centre and the Laser-Run at Sheldon College.

Updates will be posted throughout the day on the Modern Pentathlon Australia Facebook page. A huge thank you to all the volunteers who have worked so hard on this event.