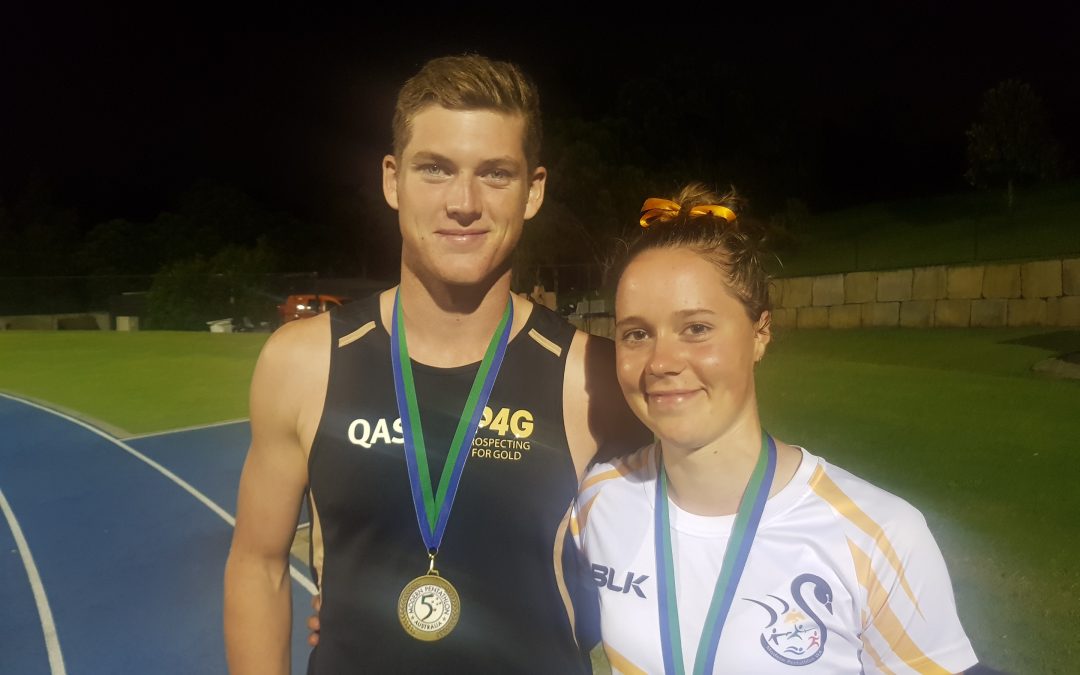 Two teenagers have claimed the senior titles at the 2020 Modern Pentathlon Championships in Brisbane.

Perth’s Nikita Mawhirt has won her first open national title, and the first by a Western Australian in the sport. And Brisbane local Rhys Lanskey, also created history by being the first male teenager to win two Australian open titles in the sport.

Mawhirt, the 19-year-old Youth Olympian, was back competing after a long injury break to hold off, and she managed to exceed her expectations for the day and hold off a strong challenge from 18-year-old Victorian Tully Watt, who beat Nikita for the open title last year.

Brisbane local Rhys Lanskey also created history in the sport by being the first teenager to win two senior open titles. Lanskey, who is only 18 showed overall improvement on the performance that won him the open title last year. Rhys was one of the youngest competitors at the Olympic qualifier in China in November, and his hard work across the five disciplines is paying off.

It was an emotional victory for Mawhirt after a tough period since competing at the Youth Olympics in August 2018.

“I’m just over the moon, I had happy tears after closing the line,” Nikita said. “It’s been such a big year with the injury and not even just the last year but with injuries since the Youth Olympics.

“I didn’t know where I was at after missing so much training and I just wanted to focus on the little processes and do my best.

“I was really stoked with my swim having not been back in the pool that long, I was only two seconds off my best. The fencing I was really happy with, the ride was good on a beautiful horse – thanks to Pentathlon Queensland for the wonderful horses this year. And to get a PB on the Laser-run was fantastic.

“Tully’s an amazing combined athlete, a really strong runner and shooter so having her on my tail really pushed me hard on the run.”

Mawhirt gave a lot of credit to the two weeks of training with Adam and Eszter Temesi and their squad in Coffs Harbour, for her performance in Brisbane. She will now start university in Perth and sit down with her coaches and hopefully map out some overseas competitions this year.

Watt competed well all day and at times looked like she might bridge the gap on the Laser Run but she had to make up too much time after penalties on the ride and a few less victories in the fencing. She is only 18 and will keep training hard this year, around teaching swimming lessons, during her gap year before starting university.

At just 18 and still relatively new to the sport Lanskey impressed in a strong all-around performance to win his second national open title.

He had a seven-week break after the Olympic qualifier in November to refresh and also had some illness and had to get his wisdom teeth out. He came into the Championships not as fit as last year but you wouldn’t have known by his performances.

“I made a few silly mistakes, but I thought I fenced pretty well. It’s feeling more natural now and I’m enjoying it more. From last years Nationals to now I feel like a totally different fencer.”

He and his coaches at the QAS are putting extra focus on fencing to be more competitive internationally and it was clear that this approach is paying off, without jeopardising his other disciplines.

Always a confident rider he made his clear round today look easy.

“The ride was great on a super good horse. I just had to direct and they did all the work, which is what you want.”

Racing against himself and the clock he still managed 12:46 for the combined (4x800ms and 4×5 shots), which was only a few seconds slower than his breakthrough time from last year.

“The run was good I was pleased with how I held it together at the end. My shooting let me down, so we’ll need to keep working on that. It’s been going well in training but just couldn’t put it together as well today.”

Lanskey will seek out more international competition this year with the long-term focus on doing whatever is needed for success at the Olympic Games in 2024.

Disappointingly he was not able to test himself against Ed Fernon who beat him for the Olympic qualifying spot in China in November. Fernon stayed in Sydney to prepare for the World Cups in Bulgaria later this month, with his priority being a top performance at the Tokyo 2020 Olympics in early August.

Marina Carrier, who has been selected for the Oceania women’s spot for Tokyo 2020, also didn’t compete. She has missed a lot of training over recent months following a terrible run of injuries. Thankfully she is now back able to do all sessions as she focusses on being in peak form for the Tokyo Olympics.

Van Rensburg, who turns 16 next week, took the gold ahead of 14-year-old Zara Temesi from Coffs Harbour (NSW).

Van Rensburg, who travels to Coffs Harbour from the Central Coast to train in the Temesi squad for a weekend every few weeks, had a brilliant day. She had the second fastest swim (2:23.81) of all competitors, and then had the most victories (36) of all pentathletes (male and female) in the fencing – to give herself a one-minute and 50 seconds lead over Temesi to start the Laser-Run.

Temesi, showed her excellent running form to complete the 3x800m and 3 shoots in a personal best and world class time of nine minutes 38 seconds. Van Rensburg also produced her best combined time of 10:41 to win comfortably. Coach Eszter, who represented Australia at the Athens 2004 Olympics, and her husband Adam were thrilled with their times. The girls have a big future ahead.

“My swim was almost a PB, my fencing was really good – I kept up with the fencers and the run I stayed ahead, so pretty good!” she said with a big smile.

“I’ve definitely improved with my run, I was hoping to go a bit quicker in the swim but I’m very happy with what I got.”

The commitment to training from her and her family is paying off. She spends every third weekend up training in Coffs Harbour and then does her other sessions either in Newcastle or Sydney, so a lot of travel. The plan is to keep training hard and focus on getting the run time down ahead of the international competitions later in the year.

Tom Langdon Macmillan (QLD), also just 14, had a convincing win in the U17 boy’s event.

There was no sign of a foot injury as he streaked the Laser-Run in 8:52. Earlier in the day he had 28 victories in the fencing and swam 2:31.40 for the swim – a time he was slightly disappointed with. Victorian Lachlan Nicholls performed well all day to win the silver medal.

“My first two shoots were bad but my last one was good,” a happy Langdon Macmillan said.

“The fence was better than expected and my swim was a bit slow, but I had GPS on Friday so maybe I was a bit tired.”

The talented athlete was due to race in the finals of the QLD State Athletics Championships this weekend, but he chose Tetrathlon. In November, he got his first international Tetrathon experience when he was 17th at the Youth Asia/Oceania Championships in Wuhan.

In other noticeable results:

– Will Stanfield (QLD), 69 years young, took out the Masters Pentathlon competition with strong performances across all disciplines., and some well deserved handicap points. Ed Egan, 49, from northern NSW was second this year, highlighted by his 32 victories in the fencing and a strong laser-run.

It was a fantastic effort by all competitors and congratulations to all medallists.