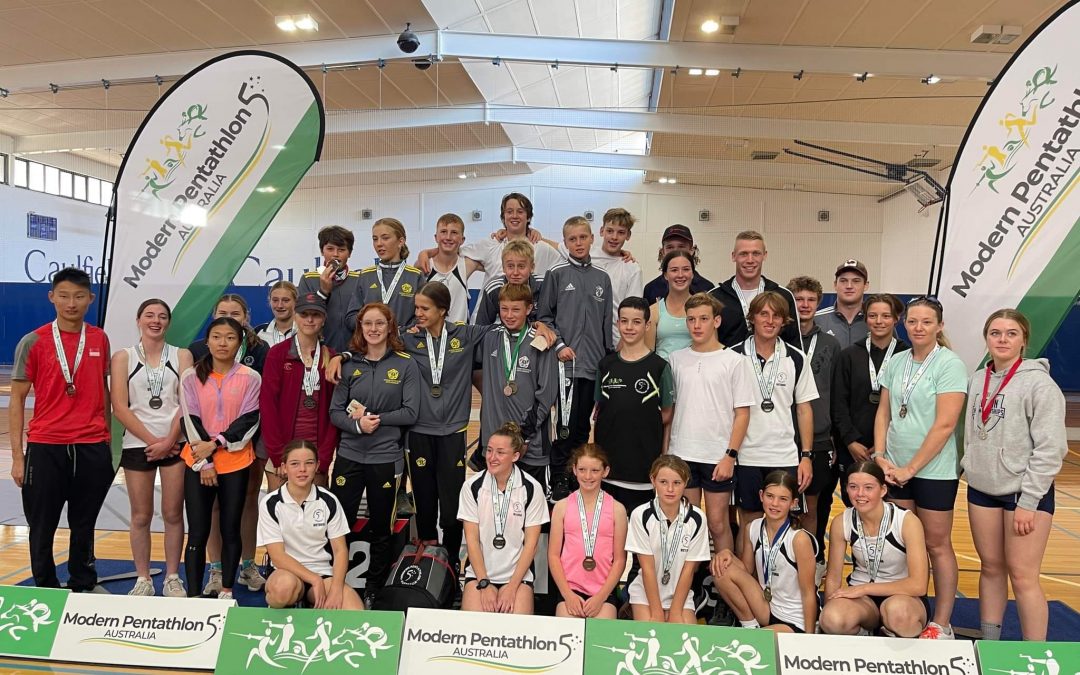 Australia’s outstanding pentathletes have turned out in record numbers, adapted to the new competition format really well and delivered impressive performances at the 2022 National Championships in Melbourne.

The 34 entries, with two from Singapore, was very pleasing after two years of COVID disruptions. The athletes converted all their hard work, passion and enthusiasm into sensational results.

A more exciting and fast-paced format has been introduced to the sport this year, which will be the new format for the Paris 2024 Olympic Games and all major championships going forward. The new format sees all disciplines contested in fast succession back-to-back. The MPA local organising committee adapted the schedule to match the new timing and format as closely as possible.

At Caulfield Grammar School today the Fencing Bonus Round, Swim and Laser-Run (now 5x600m and 4×5 shoots for Seniors, Juniors and Under-19) took place in under two hours.

In the senior women’s event, 18-year-old Genevieve Janse van Rensburg from Sydney won her first senior modern pentathlon title in a great contest with Tully Watt. The teenager taking the title with 1294 points over Watt’s 1269 across the five disciplines.

At only 20 herself, Watt was looking to add to her first senior title in 2019 and silver in 2020, however it was the Fencing that was the decisive discipline for Janse van Rensburg.

Janse van Rensburg started the day with a 21 point lead, 18 of which came from the Fencing Ranking Round yesterday. She then gained another four points over Watt in the Bonus Round. Only 1.35 seconds separated the pair in the pool with Janse van Rensburg edging another 3 points ahead with her impressive 2:18.00 (200m).

A quick transition to the Laser-Run and Watt was starting 28 seconds back. In what is always a strong discipline for the Victorian she managed to pull back three seconds, however much improved running is on show from Janse van Rensburg who produced a Laser-Run personal best and confirmed her place as the Australian Champion.

Aleska van Heekeren produced the fastest senior women’s Laser-Run with 13:35 and bridged a big gap to Hannah Crowther, however Crowther who led after the Riding hung on to bronze with 1005 points with van Heekeren on 953 points after not contesting the Riding. Singapore’s Shermaine Tung finished fifth with 879 points after also not riding yesterday.

A disrupted preparation due to a back injury couldn’t stop Rhys Lanskey from winning a third consecutive national title. His breakthrough win in 2019, was followed in 2020, and then with no nationals due to a pandemic pause in 2021, today was the trifecta in 2022.

The 20-year-old from Brisbane had his customary strong ride yesterday and fast swim today, and despite being underdone in the Fencing and Laser-Run his still won comfortably with 1219 points. Lanskey enjoyed the new format, and was fine with the time from the Fencing to the Swim, however would have liked more time to prepare for the Laser-Run.

Timothy Oliver, 27, found the format to be “really good” and it showed with his blistering 12:17.00 for the Laser-Run to finish in second with 1032 points. The Sydney-based athlete fenced really well but he was 30 seconds behind Lanskey in the swim and was eliminated in the Ride.

Fencing was the strongest discipline for Kiat Xuan Kok from Singapore who claimed the bronze with 952 points.

Temesi in brilliant form ahead of trip to Spain

16-year-old sensation from Coffs Harbour Zara Temesi claimed the U19 Tetrathlon (no Riding) National title in brilliant fashion finishing with 12:29 for the Laser-Run. Only Oliver in the senior men was faster. The daughter of 2004 Olympian Eszter and co-coached by father Adam, also showed her technique, strength and speed in the Fencing and Swimming for a total of 1002 points.

Victorian Alana Docherty, who is also only 16 and with a bright future ahead took silver with 737 points. Her best discipline being the swim.

Despite the hundreds of kilometres between Sydney and Coffs Harbour, Janse van Rensburg and Temesi train together as often as they can. They’ll be heading to Spain next week with Adam and Eszter for training and competitions.

Lachlan Nicholls (VIC) continued his great Riding and Fencing performances from yesterday in the pool and Laser-Run course to claim the junior pentathlon title with 1183 points. The 17-year-old started the competition with the maximum 300 points in the Riding (the only athlete to do so) and then finished 13:45 in the Laser-Run. Nicholls is completing his final year of school, COVID disruptions with swimming training and recently having COVID himself meant his swim and running where below what he is capable of. However, definitely a great talent to watch for the future.

Fellow Victorian Amos Vagg had a great Laser-Run (13:02) and was three seconds quicker than Nicholls in the pool but his fencing was his weakest discipline. The 18-year-old finished with 892 points, without contesting the Riding yesterday.

There were big fields in the Under-13, Under-15 and Under-17 competitions with the young athletes making the most of the superb facilities at the Caulfield Grammar School. (Results available Sunday)

Although not counted as national title there will be relay events on Sunday to conclude the wonderful three days of competition. Athletes are grouped in teams to allow for younger athletes to be mentored by older athletes. There will be lots of fun, to go with the competition and a great opportunity for athletes to gain more experience and learn from others.

These National Championships, and all the events held around the country each year, could not happen without the tireless work from the teams of volunteers. Thank you to all the volunteers, athletes, coaches, supporters and officials who sourced horses, secured venues, set-up courses, adjudicated, scored, timed and overall contributed to an outstanding event.

Special thanks to everyone on the Local Organising Committee and special mentions for Competition Manager Guy Clare and MPA Pathways and High-Performance Manager Hannah Every-Hall.

Keep checking the social media channels for the great photos and videos that have captured the wonderful event.