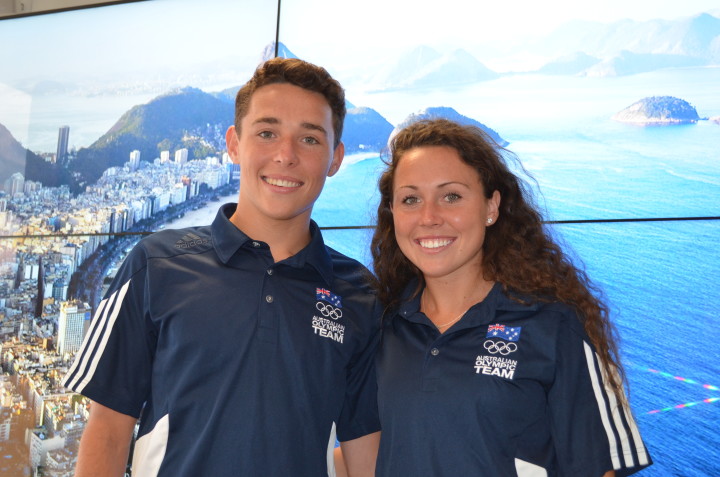 Chloe and Max Esposito are back in Australia following a sensational international season where they earned selection for the Rio 2016 Olympic Games.

The smiling siblings have beaten some of the biggest names in their sport over a long competition season and now they have been given a month off training from their coach Daniel, who is also their father and 1984 Olympian.

“We are back in Australia for three months and we now get a whole month break from pentathlon,” a relieved Chloe said.

The pair landed in Sydney late on Tuesday night after 30 hours of travelling from the World Championships in Germany.

Chef de Mission Kitty Chiller, herself a pentathlon Olympian from 2000, explained to the media in Sydney that their mother Suzanne was asking how their flight was, on the phone, and their dad wanted to talk to Chloe about ideas he had to improve her shooting.

Max, Chloe and their parents have been based in Europe for the past 18 months after making the big decision to leave the family business and surround themselves in the best training and competition environment.

How much of a break they actually gets remains to be seen. If Max’s recent 18th birthday is anything to go by it could be short lived for the hardworking pair.

Max turned 18 just days after being selected for the Olympic team. However with a World Cup final and World Championships still to contest he did not spend the day like most 18-year-olds.

“We started with a 5km swim which was so hard and intense. Then we did six times 1000m with a 4km warm-up and 2km warm-down. The worst birthday present ever! Then we had some birthday cake and then we did a fencing session,” he said with a laugh.

All of this commitment and dedication has paid off though.

A year ago Max was preparing to compete at the Youth Olympic Games and was thinking about the 2020 Olympics. He didn’t even have his rider’s license needed for senior competition.

Now after becoming the first Australian male to make the final at World Cups and with his win at the Asia/Oceania Championships he fast tracked his Olympic dream and his confidence is building.

The pair had the honour of being Australia’s first selected athletes for the 2016 Australian Olympic Team last month after winning the Oceania spots in Beijing. As they were not in the country then today’s press conference was like a real selection announcement.

Chiller was obviously very proud to present the athletes with their Qantas boarding passes to the Rio 2016 Olympic Games.

“I could not be prouder of Max and Chloe,” Chiller said. “They have produced outstanding results at every event they have entered this season.

“They epitomise the hallmark of an Australian Olympian – tough but respectful. The way they go about their sport is an honour to watch and they certainly deserve all the success they are getting.”

After finishing seventh at the London Olympic Games as a 19-year-old, Chloe endured two horrible years of injury before a fantastic 2015 season highlighted by bronze at the World Cup Final and a world ranking of seven. Chloe and Max have definitely caught the attention of the pentathlon community and their competitors.

“Credit must also go to their father Daniel, a 1984 Olympian in pentathlon, who, along with wife Suzanne, gave up their swim school business in Casula to move to Europe to give their children every chance of success,” Chiller explained.

Remarkably Max and Chloe have a 21-year-old sister Emily who is targeting selection in pistol shooting at Rio 2016. She represented Australia at the 2010 Youth Olympic Games and the 2014 Commonwealth Games.

Chloe is thrilled to be going to her second Olympics with her younger brother but is also hoping Emily joins them too.

“I’m so happy that Max and I are going together and hopefully my sister who is also trying to qualify as well,” Chloe said. “If she gets in it will be the three of us together. So hopefully all three of us (and dad) will go.”

Emily is currently competing at the World University Games in Korea and she will catch up with her brother and sister straight after in Sydney for a few days break before returning to her training base in Melbourne.

These young, humble athletes are a wonderful example of how if you keep working hard you’re your dreams can come true.

The next confirmed selections for the 2016 Australian Olympic Team will be sailors in December. With the possibility of earlier selections in open water swimming, trampolining and rhythmic gymnastics. The final team size is expected to be between 460 and 470 athletes.