Great opening day of competition at the 2022 Nationals 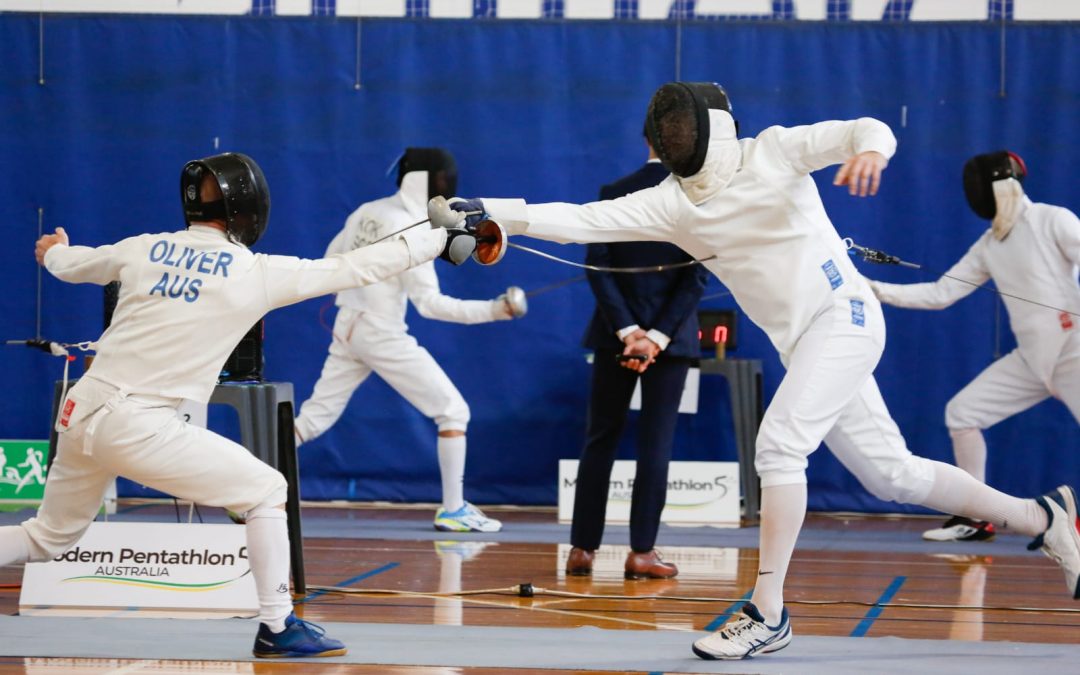 After the first day of competition at the 2022 Australian Championships in Melbourne there have been plenty of fantastic performances and an extremely tight contest for the senior women’s title.

The day started with the Riding competition at Willow Lane Equestrian Centre before the competition moved to Caulfield Grammar School for the Fencing Ranking Round, with these fine facilities hosting the rest of the Championships over the weekend.

In the senior women’s event, two outstanding young athletes are in fine form. Genevieve Janse van Rensburg (NSW) started the day with a strong show jumping performance and took a narrow lead of three points into the Fencing Ranking Round over Tully Watt (VIC). Watt, 20, who won the 2019 title had 18 victories (226 points). However, 18-year-old Janse van Rensburg had 21 victories (244pts) to extend her lead to 21 points (529) going into the Fencing Bonus Road, Swimming and Laser-Run on Saturday.

Hannah Crowther (VIC) was leading after the Riding, with a clear round and 10 time penalties for 290 points, and also fenced well to have 474 points after a strong opening day. The MPA Board member had a busy day before attending the Annual General Meeting in the evening.

Defending champion Rhys Lanskey has a big lead in the senior men’s event. The 20-year-old from Brisbane started the day with a fantastic Riding performance (293 points) and scored 196 points in the Fencing Ranking Round with 13 victories for a score of 489, heading into the second and final day.

Singapore’s Kiat Xuan Kok and Timothy Oliver (NSW) both were fantastic in the Fencing with 232 points each from their 19 wins. Unfortunately for both 27-year-old athletes they scored 0 points for the Riding. Oliver had an elimination due to three riding refusals and there was a scoring correction for Kok.

Lachlan Nicholls (VIC) had a clear round and no time penalties to start the day and be the only rider to score 300 points in the show jumping. He then had 18 fencing victories (226pts) to finish off a great day on 526 points. The 17-year-old is completing his final year of school and recently had COVID but it didn’t show today. Fellow Victorian Amos Vagg started his competition with 11 fencing victories (184pts) after not contesting the Riding. He’ll be looking to make up some ground on Saturday.

Zara Temesi from Coffs Harbour got her competition underway with a strong performance and 17 victories (220 points) in the Fencing. Alana Docherty (VIC) scored 142 points from her 32 Fencing bouts. Both girls are only 16 and competing in the Under-19 event. Temesi has strong international results and will be aiming for a big day on Saturday, and challenging the senior women in the Laser-Run.

There are big fields in the Under-13, Under-15 and Under-17 competitions for girls and boys ensuring an action packed day on Saturday with national titles and medals on the line.

A faster competition format for the sport has been introduced globally, ahead of the Paris 2024 Olympic Games. The local organising committee has been working hard to replicate the new rules and timing changes for the competitors on the Saturday.

The Seniors, Juniors and Under-19 athletes will complete the Fencing Bonus Round, Swimming (200m) and Laser Run in under two exciting hours. Each win in the Fencing Bonus Round is now worth 2 points (up from 1). The Laser Run has changed from 4x800m with 4×5 green shooting series to 5x600m and 4×5 shots. The under-19, Juniors and Seniors now run 600 metres before entering the shooting range for the first time.

Action gets underway at Caulfield Grammar School from 930am for the Youth athletes, then followed by the Juniors and Seniors.

Full details on the 2022 Nationals here>>