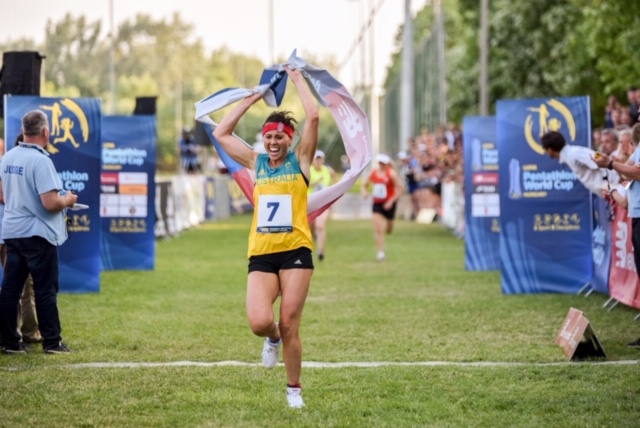 Chloe Esposito made history when she sprinted to gold in front of a screaming crowd at Rio 2016, and now she has etched her name in the record books once again. The 26-year-old Olympic champion became Australia’s first ever Modern Pentathlete World Cup gold medallist on the weekend in Budapest, Hungary.

“Although not as prestigious as the Olympics, World Cups can arguably be just as tough,” Esposito said. “Different nations can enter up to four of their best athletes so you can often get a really strong field.

“When I consider the field for this final had the London Olympic champion and two World Champions I am very proud of what I achieved!”

At the third World Cup event of the season, there was a sense of déjà vu for Esposito’s fans who saw her enter the final Laser Run phase in seventh position, as she did at the 2016 Olympics. With a 39 second deficit behind the leader, she would have to pull out all stops for a shot at gold.

Korea’s Kim Sunwoo headed into the Laser Run in first position after a dominant fencing performance. Kim managed to hold onto the lead until the final lap when Esposito and Anastasiya Prokopenko of Belarus ran her down.

Once Esposito passed Prokopenko, she eventually reeled in Kim to take the victory by four seconds. Prokepenko passed Kim on the finish line to claim silver.

We did it!!! From having a terrible start to 2018, questioning myself whether I was really doing the right thing… I can say YES and YES 100 times over. Pushing through those dark days to get moments like this is why we continue to do it… when they say you come out stronger you really do come out stronger! Couldn’t have done it without my amazing team. First Australian ever to win gold at a World Cup. What better place to do it than at my home away from home! #worldcup3

However, it hasn’t all been smooth sailing for Australia’s golden pentathlete, who has struggled to return to form since taking a year off post-Rio.

“When we moved back to Budapest [after the year off] in October 2017 we had a huge job to get back to competition fitness,” she said.

“I competed at a few smaller comps in late 2017/early 2018 and picked up a few wins but was yet to return to world stage. After a few months of hard grind, in and out the pool at 5am on snowy mornings, running up and down the Danube River, I wasn’t seeing the results I was hoping for and with World Cups on the way I knew I wasn’t as fit and the self-doubt kicked in.

“In February I competed in World Cup 1 in Cairo, Egypt and finished 7th. It wasn’t the place I was after but the top 10 finish was a huge confidence boost and brought back the hunger.

“The next eight weeks in training were huge but I’ve learnt to trust the process. One of my favourite quotes is ‘If you can’t do it in training, you’ll never do it competition’ – by the time you get to competition the hard work has been done.”

And the hard work has paid off.

Two weeks earlier, Esposito achieved a goal she set for herself six years ago – to swim 200m freestyle in under 2 minutes 10 seconds. On April 23 she recorded a time of 2:09.61 and “burst into tears” as it represented years of hard work coming to fruition.

“From having a terrible start to 2018, questioning myself whether I was really doing the right thing… I can say YES and YES 100 times over,” Esposito shared on social media following her World Cup victory.

With a renewed sense of purpose and self-belief, Esposito has a few more events before she has a crack at her next major goal.

“My next big event is World Cup 4 in Sofia, Bulgaria at the end of May. My preparation for this one will be different than World Cup 3 as my next target is the World Cup Final in Astana in June.