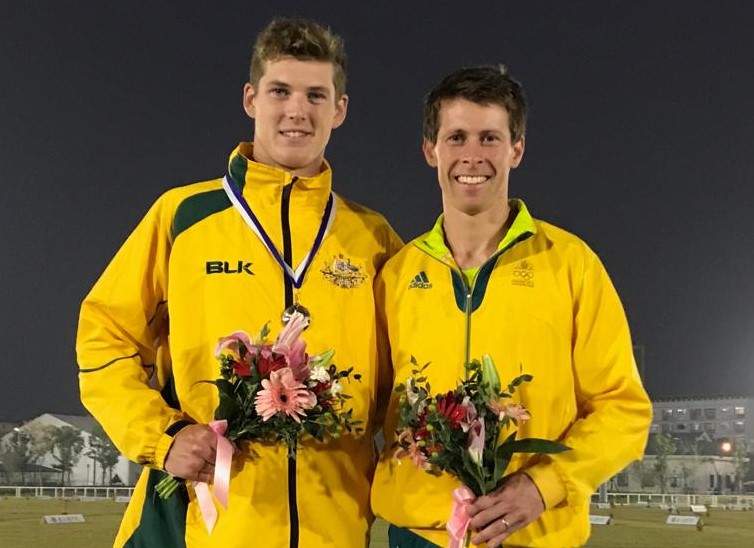 Australian modern pentathletes Ed Fernon and Rhys Lanskey both came into the Olympic qualifying event in China with different stories and ‘nothing to lose’. And while Fernon won the Oceania spot for the Tokyo 2020 Olympic Games with a remarkable performance and sporting comeback, both athletes excelled.

Fernon, who represented Australia at the 2012 Olympics, had not competed in a major international event for four years. And after just three months of full-time training he was able to produce one of the best performances of his career and is off to his second Olympics.

“It’s been an amazing experience and a real team effort,” Fernon said with a huge smile after the event.

“So many people supported me along the way. Three months ago, this was the furthest thing to come back and have another shot.

“I’m really proud of what I’ve been able to achieve here and I’m really excited for training for Tokyo.”

The property developer from Sydney, had an impressive fence, was just off his best in the swim (2:18.38), achieved the maximum of 300 points with a clear show-jumping ride and in the final Laser Run event he held his nerve and held off a fast finishing Lanskey.

Fernon finished the Asia/Oceania Championships in Wuhan competition in 14th place from the field of 32 with a total of 1367 points.

The 31-year-old took some convincing from his running coach Dean Gleeson to return to the sport for another Olympic tilt. But with the encouragement of his wife (they have two young boys), and a lot of fast-tracked hard work he got himself back into great shape and drew on all his experience to deliver a remarkable performance.

“It shows that when you relax and draw on experience of all of those past competitions, and knowing what you have to do,” Fernon said after the event.

“I knew I could just go out there and perform. It’s probably the most relaxed I’ve ever been in any competition and I’m just so happy with how the day went.”

Lanskey, who only recently turned 18 and only in the challenging sport for 18 months mixed it with the world class men. He finished the day in 19th, with 1264 points and a wealth of valuable experience for the future.

The Brisbane local who only finished high school this time last year showed great maturity and talent throughout the day.

Lanskey started well in the fencing with six early wins, before a long run of defeats, he then regrouped to win two bouts in the bonus round. He was 61 points down on Fernon after his weakest event, before producing the 9th fastest swim of the day (2:08.35) and a very impressive ride, with only two rails down and six time penalties (280pts). He started the Laser Run 61 seconds back and after clawing back 16 seconds after the first shoot there was a chance of a remarkable comeback of his own but he had one a poor second trip to the shooting range and Fernon held his nerve and extended his lead over Lanskey.

MPA President and Sydney 2000 Olympian Kitty Chiller was thrilled for both athletes.

“It really has been a remarkable competition by both guys and for vastly different reasons,” Chiller said from China.

“Ed having had almost four years away and just back training for three months and then Rhys who was talent identified by the Queensland Academy of Sport and only in the sport for 18 months. Great stories and performances by both athletes. There were no losers here today.

“Congratulations to Ed, who will be nominated to the AOC for his second Olympic Team and to Rhys who is an outstanding prospect for the future.”

Korean Jihun Lee (1511 points) won the competition and claimed one of the five spots for athletes from Asia. This win follows on from his fourth place finish at this year’s World Championship and Tokyo will be his Olympic debut.

There will be more to come in the wrap-up from the senior events in China in the coming days, and the junior and team competitions get underway later in the week, where Lanskey will again be competing along with a further 10 Australians in action.

Remaining events at the Asia/Oceania Championships and Australians in action: