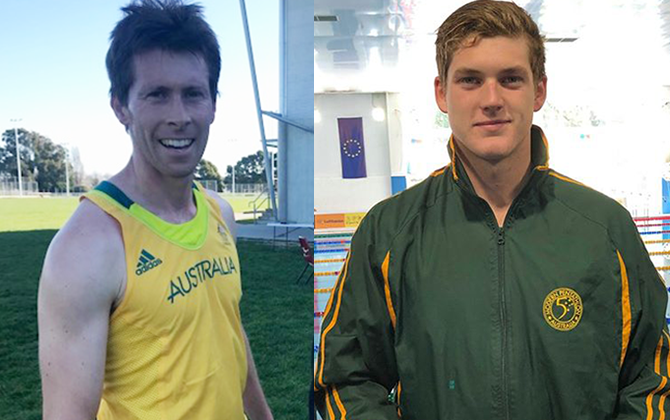 An exciting contest between 2012 Olympian Ed Fernon, who is on the modern pentathlon comeback trail, and 18-year-old national champion Rhys Lanskey will take place in China on 12 November.

The first time the two Australians compete against each other, will be when the prize is a coveted spot at the Tokyo 2020 Olympic Games. The top placed Oceania athlete at the UIPM Asia/Oceania Championships in Wuhan books their place at the Games. The top five Asian athletes book their spots, so competition will be top quality.

When Max Esposito, who was seventh at the Rio 2016 Olympics, was ruled out of the qualification event with injury, Lanskey’s chances of securing a spot at the Olympics improved. But at the same time 31-year-old Fernon was convinced by his athletics coach, and then his wife, to come out of retirement.

“We were originally thinking we would be going up against Max at the Trials in China,” Lanskey, from Brisbane, said. “Max is a fantastic athlete and ahead of me on the scoresheets, so we were really going for the experience.

“But we got quite a big shock when he wasn’t going to be there, which opened a small window. But Ed is not going to be easy. He’s a world class athlete and all I can do is do my best. I’ve got nothing to lose!”

Lanskey was impressive in winning the national title in March 2019, off only a few months solid training, and got great experience when representing Australia at the World Juniors and World Youth Championships in Europe across July. He has been back training full-time with his coaches at the Queensland Academy of Sport since returning from Europe.

“Since Nationals – I feel like a different athlete now,” Lanskey said. “Before Nationals I hadn’t trained too much before that competition at the intensity I am at the moment.

“I feel like we’ve worked out how my body works, and working with the coaches to make sure I can recover well from each session and be ready for maximum effort for the next one. I have definitely improved quite a bit since Nationals and looking for bigger things at the moment.

“It should be a great experience in China and I’m looking forward to competing for Australia again.”

When Fernon got the call from his old athletics coach, Dean Gleeson, less than three months ago – making a comeback was the furthest thing from his mind.

After several phone calls from Gleeson, he asked his wife what he should do, and she encouraged him to give it a go.

The Sydney-based property developer, with two young sons under the age of two, is enjoying the pentathlon training again after a four-year break.

Fernon’s last competition was in 2015 at the World Championships. He has achieved other sporting conquests though. In 2017 he won the Mongol Derby, which is the longest and toughest horse race in the world. And also climbed some of the world’s highest mountain peaks.

“I didn’t even know if it was possible to achieve the qualifying standards for the Olympic trials in such a short time-frame,” Fernon, who is based in Sydney, explained.

“But I made some phone calls and established what I needed to do and then got to work. Six weeks after resuming training I managed to achieve the standards in New Zealand and book my place on the start line in China.”

Fernon has got himself back into great shape in less than three months of hard training. He has surprised himself with how his body has responded to elite training again.

“I’ve been absolutely amazed with the muscle memory and I’ve really surprised myself with every sport and how I’ve been able to get back to a good standard.

“At the moment I’ve been fencing really well and my running and shooting is going well. And to put it in perspective I swam 2 minutes 40 (seconds) for the swim (200m freestyle) on my first day back – which is a pretty poor time – and I didn’t know if swimming the qualifying time in New Zealand would be possible but I achieved that.

“We put a plan and a strategy in place and with lots of hard sprint sessions, and a lot of lactic acid, I was able to get down to 2:14 in six weeks. Hopefully this time will come down in China, and if I was to be successful and secure a place at the Games that gives me a lot more time.”

Lanskey swam a personal best for the swim at the World Youth Championships (2:05.66) this year and is a very strong show jumper. Fernon is likely to have the edge in the laser-run, the final event after a long day of competition.

“It’s been really enjoyable getting back into training,” Fernon explained. “I’ve got nothing to lose here in this competition. Really for me, if I’m unsuccessful in China the worst-case scenario for me is I just got fitter over the last three months.

“My business is going really well, I’ve got a great family, everything is good. So this would really be the icing on the cake and being able to go and do another Olympics. I know what it means it’s very very special but it’s not the end of the world. I’ll go over there pretty relaxed about the competition to be honest and we’ll see what happens.

“I finished in 2015 with mixed emotions. I was plagued with fatigue for quite a few months there I got to a point where I was almost relieved that I didn’t qualify for Rio (Olympics). I was finding the training monotonous and I had lost a bit of passion for it which was translating to my later results.

“But now coming back after having four years off I’ve really been enjoying the training and enjoying all the events. I’ve been re-introducing myself to the love of the sport and it really is such a fantastic sport and very challenging.

“I’ve been very grateful for the opportunity that’s been given by so many good people around me, to go out there and enjoy it again. And if it’s only for three months then that’s fine, and if I qualify, I’ll go through until August next year and that will be fantastic.”

“The fencing’s going to be very important in China,” Fernon said. “All the other events are going through your processes, but the fencing is the big variable where you can really change your position and change your opponent’s score as well.

Fernon gave his old fencing coach, Olympian Bill Ronald a call, and the two have enjoyed getting back to working together again.

Lanskey, who had never tried fencing before he took up the sport, is training hard with Australian fencing high performance director Paul Crook in Brisbane. Since returning from Europe that has been a priority.

“We’ve been mainly focusing on fencing, to improve on that one a little bit quicker,” Laskey said.

“We’ve really been upping the training in the fencing and doing a lot more shooting with the run. Those two areas after the Worlds (U21 and U19) were the main focus for improvement.”

Lanskey is relishing the fencing training and really enjoying the challenge.

“I’m seeing a lot more improvement now, I’m really enjoying it. If you’re not in the top half of the fencing its hard to come back.”

Experience up against Youth

In contrast Lanskey has never been to China before but he’s looking forward to it. He will be joined by his coaches and family. He has a big week of competition as he’ll contest the age group individual and relay events, after the senior Olympic qualifier.

“We wanted to maximise the competition opportunities in China. And anytime you pull on the green and gold and represent Australia is really special. The Olympic trials will bring out the best in the quality athletes in China,” Lanskey said.

Both athletes know they are at opposite ends of their career cycles and feel they have nothing to lose. They are both extremely motivated to grasp the opportunity of representing Australia at Tokyo 2020.

The women’s senior individual event will be held on Monday 11 November, with the preview to follow in coming days.

In total there will 14 Australians competing across the senior and age group events in China. This is likely to be Australia’s biggest travelling team to a major international competition.