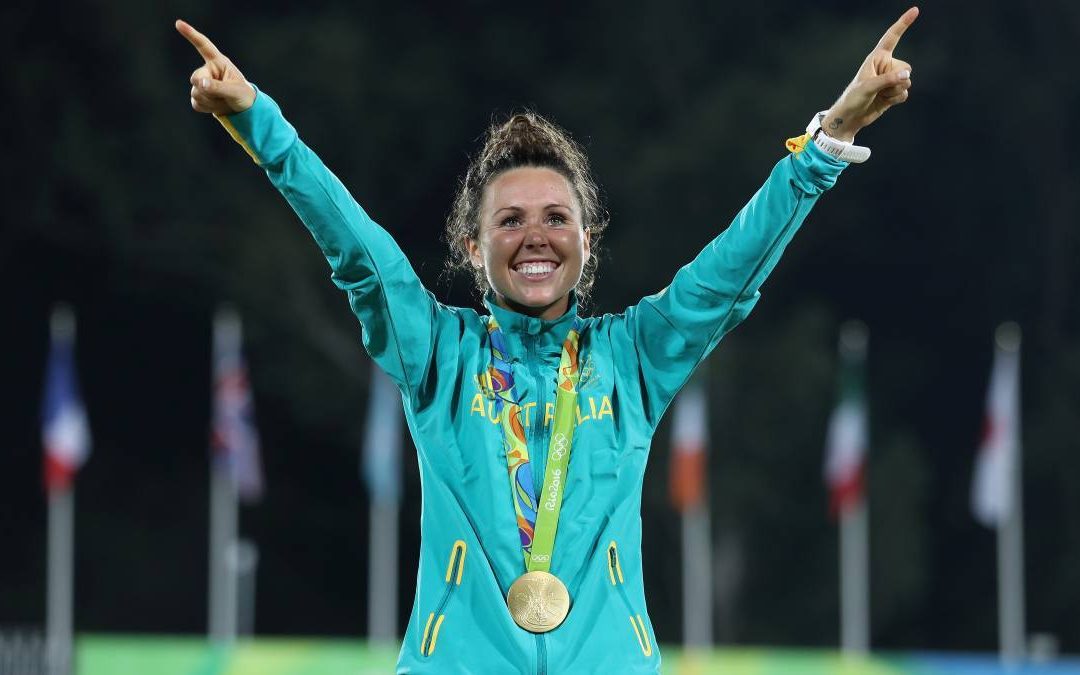 Chloe Esposito stormed past her rivals in the final event of the modern pentathlon to win gold at the Rio 2016 Olympic Games. She became Australia’s first Olympic medallist in the sport and set a new Olympic record in the process.

Starting the combined running/shooting discipline in seventh place and 45 seconds behind it seemed like the gap would be too great for the top of the podium. However as the 3200m run and four times on the shooting range it became clear she was the strongest runner and handling the pressure on the range.

Esposito only missed one target in the four lots of five shots as the women in front of her faltered on the range. With each lap and each shot she picked off the six in front of her one by one.

Her final combined time of 12 minutes, 10.19 seconds earned her 1372 points and an Olympic record. There was only smiling and no pain when she crossed the finish line.

“I can’t describe it, it’s just the best feeling ever I can’t believe that all the hard work has finally paid off,” a beaming Esposito said.

“Everything just came together. I knew there was going to be a day when it would and I’m so thankful that it was today. I just can’t believe it.”

After a tough nine months battling injury where she missed World Cups and World Championships, Esposito was very flat and felt her Olympic campaign was off track.

“I was really down about it and not thinking I was going to do well,” Esposito explained.

But around two months ago after winning the Hungarian Championships she started to believe she could win gold.

“Training then started going well, everything was going well and I have never thought this before but at that time I thought ‘you know what I’m going to win’,” Esposito recalled.

“I just has this gut feeling that I could do this and for the first time ever I had this feeling.”

She had plenty of supporters and family in the crowd at Deodoro Stadium urging her on.

Her coach and father Daniel’s big pep talk to relax and have fun before the final event paid off.

“I just told her to enjoy it and sing a song on the range,” he said. “I’m not sure if she did but she was outstanding and it’s a dream come true. I was definitely watching that last Combined event as a father and not a coach.”

Chloe could not thank her father enough and gave him credit for getting her to Rio in gold medal shape.

“He is a really tough coach and I hear the other girls saying ‘those Espositos train so crazy or they do too much but it’s paid off. I couldn’t have done all my past results and this result today without dad. He just knows which buttons to push and I couldn’t have done it without him.”

Back in the 2000 Sydney Olympics when it was the first Olympics women were allowed to compete in the modern pentathlon it was all just a dream! Today something that I have been dreaming of for a long time coming now became a reality. But I couldn't have done it without all the help of my family, coaches, friends, physios, everyone who helped me get here today! I'm am truly blessed and so grateful for you all!! It's not just my Olympic gold, it is ours! Thank you everyone for all the messages and calls, I'm over the moon! And still can't believe what just happened! Sorry if I haven't gotten back to you yet but I am so thankful for everything ❤️🇧🇷 #rio2016

Brother Max who competes in the men’s event on Saturday, her mother, her fiancé, her sister and Team Chef de Mission Kitty Chiller were all screaming for the 24-year-old.

“I can’t believe it,” an emotional Chiller, who represented Australia in pentathlon at Sydney 2000, said.

“She is Olympic champion and Australia’s first in pentathlon and its Australia’s 150th gold medal and I couldn’t think of anyone more deserving than Chloe Esposito.”

Chloe and her brother Max were the first athletes selected on the 2016 Australian Olympic Team back in July. Max who competes tomorrow was all ‘hyped up’ after watching his sister.

“It was unbelievable, I’m so happy for her because of all the work she put in this year and it was a tough year because of injury but the outcome was amazing,” Max said.

Max knew that his sister was in with a shot after an improved fencing performance and after the horse riding he was confident.

The fencing is always the weakest event so I sort of thought, oh okay if she has a good fence then there might be a slight chance and then after the horse riding that’s when my slight chance went to like 100 because I knew her combined was very good.

As the women in front of her faltered at the range Chloe was rock solid.

“We’ve been working a lot on our shooting in the last month so it really paid off and it was so good how she kept it all together,” brother Max said.

“It’s given me a lot of confidence. I’m so hyped after watching that, seeing her makes me think to myself, I can do that. So never give up, just push through and I can do it

In the penultimate event she had a solid ride in the show jumping round earning her 284 points, for a total of 809 points, 38 behind the competition leader Oktawia Nowacka of Poland.

The event opened up for Esposito when London 2012 gold medallist Laura Asadauskaite (Lithuania) did not finish the show jumping round after her horse refused four jumps, and likewise Beijing 2008 gold medallist Lena Schoneborn (Germany). They were therefore out of medal contention.

Esposito put herself in a good position early on Friday in Rio, coming into the show jumping in sixth position (518 points) following the swimming and fencing rounds.

The Camden-born pentathlete opened her Rio 2016 campaign with a strong start in fencing on Thursday (18 August), finishing the round-robin style tournament in 13th position. She achieved 19 victories and 16 defeats in a classy display of skill and persistence.

Previously the fencing had been Esposito’s weakest discipline and following a seventh-place finish in London 2012 she moved to Hungary with her father and coach, Daniel, to work on fencing specifically.

“It’s been a tough four years but it’s been worth it.

In the fencing bonus round – a sudden death, reverse progressive tournament – she scored one extra point, defeating Margaux Isaksen (USA).

An outstanding heat in the pool earlier in the day put Esposito in seventh position overall prior to the afternoon session. Esposito was the fastest in Heat 4, finishing in 2:12:38 – a season best time for the Australian.

She was the seventh fastest swimmer overall at the end of all the heats. Her greatest competition in her heat came from Japan’s Natsumi Tomonaga who finished a full three seconds behind in second place.