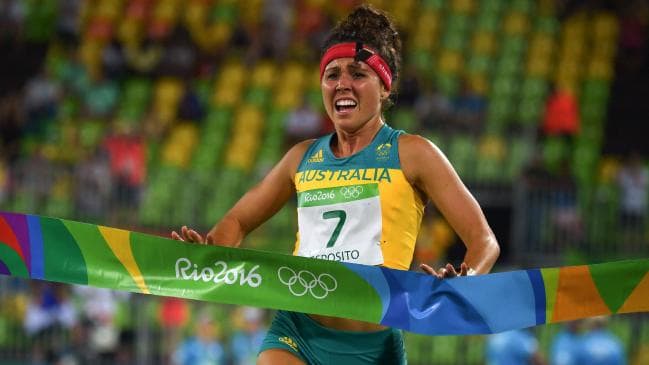 Chloe Esposito’s historic gold medal in modern pentathlon at the Rio 2016 Olympic Games was undoubtably one of the most memorable Australian moments of the Games.

Starting the final discipline in seventh place, and 45 seconds off the lead, she shot brilliantly and ran away from the world’s best in the Laser-Run to clinch Australia’s first medal in the sport and set a new Olympic record.

The win for the 25-year-old was the culmination of years of dedication from her and her family. The Espositos had lived between Australia and Hungary for several years, and spent time at altitude in Mexico, to ensure everything was being done to achieve success in Rio.

The nation and Olympic fans around the world instantly fell in love with the smiling world beater and the sport gained a new fan base in Australia and the next generation were shown what can be achieved with dedication and hard work.

The fact her younger brother Max finished seventh on Olympic debut, the same placing for Chloe at London 2012, and with the pair coached by their Olympian father Daniel it was also one of the best family stories of the Games.

Focussed and motived for Paris

Five years on Chloe will be watching Tokyo 2020 from her home in Western Sydney, with her son Ted who is almost one, and her husband Matt. But sports fans will be pleased to know that she has her sights set on Paris 2024.

“It gets me focussed, despite being locked down at the moment I’m doing what I can to keep fit with the little one here. And to think it’s only three years away now. I’m just really excited and the most motivated I’ve been for a while.”

Message for the Australian Team in Tokyo

Chloe who has been in touch with Australia’s pentathlon representatives for Tokyo, Marina Carrier and Ed Fernon recently, and she was keen to share a message to the whole Australian Team in Tokyo.

“Just have the best time. When I got my best results was when I was really enjoying it. And everyone in the Australian Team has worked really hard to get where they are, and they’ve done it before in training and I’m sure they can do it again in competition.

“Just relax, have fun, you’ve done it before and you know what you need to do!”

Going from athlete to spectator is exciting for Tokyo

“I just want to sit back and watch the pentathlon and support Marina and Ed and enjoy every bit of it. In the next three years there will be a whole lot of new athletes coming through and there will be a new competition format for Paris so I’m going to enjoy being a spectator for once.

“Part of me sometimes thinks I wish I was there (Tokyo) but I’ll be on the lounge watching with Ted and considering we are in lockdown we can’t really do anything else.

“I’m just can’t wait to sit here and watch everything for the next two weeks, its every sports fans’ dream. I’m really excited for it to start.”

Juggling being a mum and athlete

“I was back at work almost straight away swim teaching and I’ve been running, swimming and a bit of gym, so it’s been good but challenging.

“I didn’t think it was going to be easy but once I had Ted you just realise, not that I was selfish before but I guess to be a top athlete you need to be a bit selfish. All my attention is on Ted now but I’m so lucky I have mum and dad around the corner to help as well and Matt is of course a big help too so I’m very lucky to have a great support network around me.”

Will we see the Esposito band back together for 2024?

“I hope so. We get memory notifications on social media from when we were in Mexico and Europe training and competing together which is really nice.

“We speak about it and it would be nice. We haven’t really spoken about it seriously, but he’s said he’d love to get back into it, so we’ll see. I would love it!”

Max was the youngest athlete in the field of 36 on his Games debut and to finish seventh was remarkable. He has been based in Berlin for almost two years now.

“Max is doing really well. He had a few injuries which is why he stopped and I’m pretty sure he’s got on top of those now. He’s enjoying living overseas and working as an Au Pair for a family.”

The young talent and growth of the sport in Australia

“I’m always watching in the background all the great juniors coming through and everything that is happening in the sport in Australia looks really good.

There is lots of great work happening with Eszter and Adam’s group in Coffs Harbour and the other training centres around the country and the sport seems to be building up which is awesome. And everyone looks to be really enjoying it, it’s very exciting.”