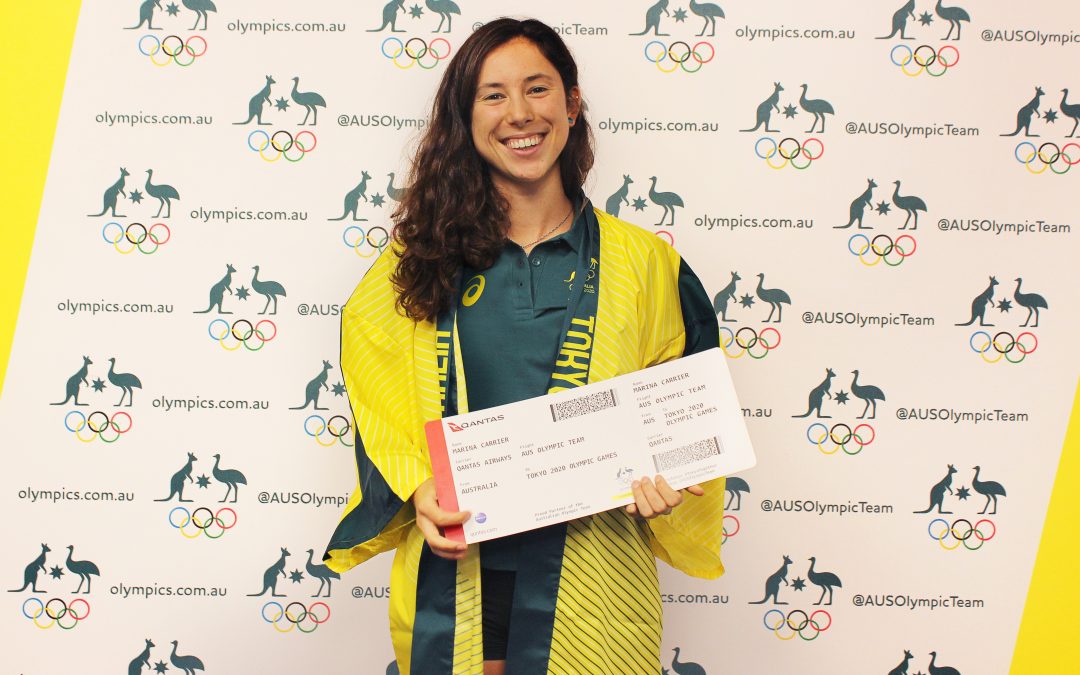 Marina Carrier will make her Olympic debut at Tokyo 2020 after being selected to the Australian Olympic Team.

The 23-year-old from Sydney, who balances training for five disciplines with studying Medical Science at Sydney University, first represented Australia at the 2014 Nanjing Youth Olympics.

Carrier has overcome an injury-riddled 2019, including a femur bone stress that threatened to derail her bid for Olympic qualification, to be named as the seventh athlete on the Australian Olympic Team for Tokyo.

“Congratulations to Marina, her coaches, family and the Modern Pentathlon community on her selection to the Australian Olympic Team,” Mr Chesterman said.

“Marina has already shown incredible grit and resilience to come back and compete through some serious injuries to chase her Olympic dream and the AOC is thrilled to announce her selection.

“Her selection today more than five months out will give her the best possible preparation for Tokyo.”

Carrier is primed to regain the health and form that saw her make two World Cup finals in 2018 and start 2019 in super form to finish third at the Polish Open, before suffering her injury.

“I got my first taste of the Olympics at the Nanjing Youth Olympics in 2014 and that absolutely lit a fire in me and made me want to go back for more,” Carrier said.

“It still feels surreal to know I’m going to Tokyo 2020 – being able to share my selection with family and friends is helping it sink in, and it’s just thrilling.

“I love competing – you’ve worked so hard for it and you get to put all your effort on show. Dealing with injuries in 2019 – including a bone stress in my femur – was challenging, because an injury like that means you can’t train and put in the work you know you need to.”

The injuries meant Carrier was unable to fence or run for several months leading into the November 2019 Oceania Championships, where only a win would guarantee her the Oceania quota.

Despite a valiant effort off her interrupted preparation, Carrier was caught in the final Laser-Run by New Zealand’s Rebecca Jamieson. While Carrier had healed up and set her sights on securing qualification through the 2020 World Cup ranking pathway, the International Modern Pentathlon Union advised in February that New Zealand had not accepted the quota spot, meaning Carrier received the Oceania qualification and booked her ticket to Tokyo.

“It takes being out of condition to appreciate the huge physical load demanded by an international level pentathlon competition. After all the time out due to injury, even making it through the full day of competition was a massive achievement in itself. By the end of the day I could hardly stand up – I’ve never been so utterly exhausted from a competition in my entire life.

“Securing my spot now means rather than chase ranking points, I can focus on getting in a big training block at home and plan out my competitive year exactly according to what suits me. I’ll be rested, stronger and much more prepared by the time Tokyo comes around.”

Carrier’s qualification secures Australia’s continuous run of female representation in Modern Pentathlon since the women’s event was introduced at Sydney 2000, from Kitty Chiller in 2000 to Rio Olympic champion Chloe Esposito.

Modern Pentathlon Australia President and Sydney 2000 Olympian Kitty Chiller is thrilled that Carrier has secured her place at Tokyo 2020.

“I am incredibly excited for Marina to have earned this quota spot,” Chiller said. “Since her breakthrough year internationally a few years ago where she finished in the top eight of the World Junior Championships, Marina has had several podium results in international events over the last two years.

“Securing this quota spot five months out from the Games means she can now fully focus on her Olympic performance and plan the best possible preparation.

“The fact that Marina trains with Edward Fernon is ideal. With the same coach and daily training environment, they can continue to support and inspire each other to produce their best performances in Tokyo.

“Marina will have big shoes to fill with the now pregnant Chloe Esposito not defending the Olympic title she so inspirationally won in Rio, but I have full confidence that Marina will produce a great performance and do Australia proud.”

Despite Tokyo being her Olympic debut, Carrier may be joined by several familiar faces, with her Nanjing 2014 Youth Olympics Chef de Mission Susie O’Neill a Deputy Chef de Mission for the Australian Team in Tokyo and several Youth Olympic teammates aspiring to Tokyo 2020 selection.

The Modern Pentathlon competition in Tokyo will see 36 athletes per gender compete in fencing (ranking round and bonus round), swimming (200m freestyle), show-jumping, and the final combined run and laser shoot (3200m and four shoots of five targets), in the Musashino Forest Sport Plaza and Tokyo Stadium.

The fencing ranking round for men and women will be held on Thursday 6 August in Musashino Forest Sport Plaza, before the women’s competition is held on Friday 7 August and the men’s medals decided on Saturday 8 August in Tokyo Stadium This will be the first Olympic Games where all five disciplines will be contested in the one arena providing a wonderful spectacle for spectators.