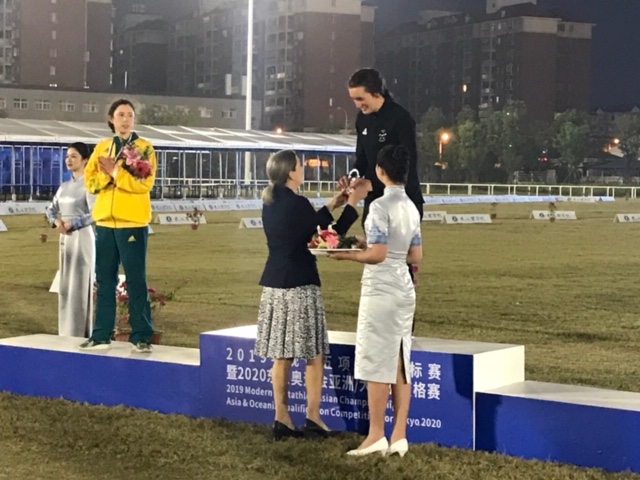 Missed training and competition, due to a recent leg stress fracture, took its toll on Marina Carrier at the Asia/Oceania Championships in China on Monday.

The 23-year-old did remarkably well to be on the start line and competed to exhaustion, but it just wasn’t enough to be the top finishing Oceania athlete and secure an automatic spot for the Tokyo 2020 Olympic Games.

After a solid day in the fencing, swimming and show jumping, Carrier had a 34 second lead over New Zealand’s Rebecca Jamieson going into the final Laser Run event but she couldn’t hold off the fast finishing Jamieson in her strongest event. Full credit to the 28-year-old from the Waikato Pentathlon Club.

Carrier needed to be helped onto the podium to collect her Oceania silver medal as she had nothing left in the tank after the grueling competition.

Modern Pentathlon Australian President, and Sydney 2000 Olympian, Kitty Chiller was on hand in China along with Team Leader for Tokyo Peter Ridgeway, other Australian athletes and Marina’s parents – who made a surprise appearance for the final Laser Run competition to cheer on their daughter.

“Marina gave it her absolute all but just didn’t have anything left in the final stages of the Laser Run. She was totally exhausted,” Chiller explained.

“We knew the Laser Run wasn’t going to be easy, and Jamieson is a fine athlete. Fully fit Marina is a world class Laser Run competitor and we hoped that previous form would get her across the line but it wasn’t to be.

“She hadn’t been able to run or fence in training for the past three months and she simply ran out of gas in the final 800 metres. Rebecca passed her with around 400 metres to go. Full credit to her, she has been doing a lot of smaller competitions in Europe and had a great competition.”

All is not lost for Carrier who is aiming to make her first senior Olympic Team, after representing Australia at the 2014 Youth Olympic Games, and has gone from strength to strength since then.

“Thankfully her injury did not reoccur, she is fine and will revert to trying to secure Olympic qualification through her world ranking via the World Cups and World Championships next year,” Chiller said.

“I had been texting her parents updates all day and they came for the Laser Run and were in disguise in the stands to not distract her. It was of course very emotional at the finish.”

Olympic Champion Chloe Esposito was not on the start line in China due to a recent injury and will also attempt to qualify via the World Cups and World Championships earlier next year.

Carrier started the day with four consecutive victories in the fencing before a lapse in form, gave some concerns. She finished the fencing with 10 victories and 15 defeats but was happy.

In the swim she swam close to her long course personal best with 2:19.37. She rode well in show jumping on a strong horse with two rails down.

In the final event, which covers 3200 metres and three shoots, she shot well in the first two shoots but her fatigue showed in her final shoot. Jamieson was gaining around 10 seconds on her for each 800 metres and passed the Australian as she ran out of gas. She battled on the finish to a big cheer.

Jamieson, 28, was eighth at the recent Laser Run World Championships and finished 13th overall in China. She was also emotional at the end – thrilled she has won the Oceania title and worried for Carrier, who faded to 20th.

The men’s competition takes place on Tuesday with 18-year-old Rhys Lanskey and 31-year-old Olympian Ed Fernon battling for the Oceania men’s title and the automatic spot for Tokyo 2020.